WELCOME to the fifty-fifth issue of the Bay City Post! - Keeping you updated on the best city on the grid! Now with new, larger type for the aging eyes of Bay City citizens...or maybe that's just the eyes of the editor. ;) 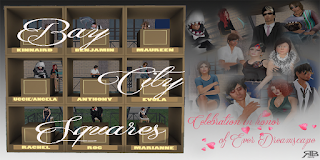 In Bay City, we start April with a celebration of Ever's Night.  April 1st was the birthday of Ever Dreamscape, our erstwhile Post editor, mischief maker, fire starter, and host of many a late night game show. Many people in the City set their parcels on fire in her memory, and a game show was filmed in the lot next to the Post building. Pygar Bu hosted a lively edition of Bay City Squares, featuring nine "Bay City SLebrities" and contestants Miss Bay City Belle Mistwallow, and Truro resident Georgia Florence Sipe. From Pygar:

"Our winner of the Bay City Squares game was Georgia Florence Sipe of Truro! You will be able to spot her 'round town in her beautiful new car from 2ZM. Thanks also to our squares: Kinn, Ben, Mo, Uccie and Ange, Ant, Evola, Rachel, Roc and Mari. Hope you had fun! (thanks to Ashley for the pic!) <3 Py"

The banner featuring this year's Squares game is a gift from Bay City resident Littlebit31okla (Ashley Breil), taken by Rhy Briel. After the game show, Bay City danced the night away in the Post building's ballroom with DJ GoSpeed Racer providing the tunes, interspersed with sound clips from the original "Hollywood Squares" tv show. If you missed the fun, make sure to join us next year, or perhaps we can make this a semi-regular event!
______________________________________________ 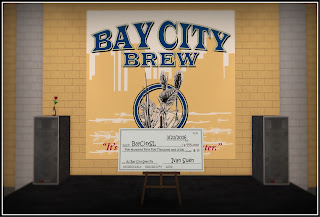 Ceremonial Check On View At The Bay City Brewery!

A message from Ivan Suen: "All - Just to provide some closure to my announcement that I'm liquidating my land business and donating all proceeds to the charity of Bay City's choice.  I have indeed done such, and tonight all proceeds from my business have been donated to BayCitySL.  My only stipulation to my donation is that it be used towards something that would make Ever Dreamscape smile.  Please consider drinks on me at the Bay City Brewery. BayCitySL, your ceremonial check is waiting for you at the brewery. -I"

We're doing some Spring Cleaning on the Post website! I've removed outdated links to places or blogs that no longer exist, but need your help adding links to new or existing places in Bay City! Please take a look at the lists along the right side of the webpage, and send suggestions (along with SLURL or web address) to me inworld or by email at kinnaird.fiachra@yahoo.com.

Speaking of Spring Cleaning (or something)... a new beauty salon just opened in Bay City. Stop on down to Georgia's Beauty Parlor to get your hair done while hearing all of the juicy town gossip! Staff still needed - inquire at the 'help wanted' sign in the window!
(Photo by Bay City resident Prissy Cox.) 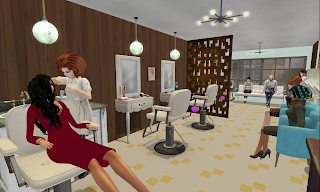 And so...on with the April issue of the Bay City Post!

Dangerous device found at Toxic Taco! Area cordoned off and emergency crews on the scene! 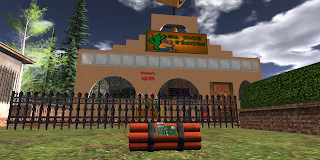 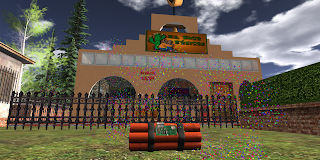 APRIL FOOLS!
Posted by Unknown at 01 April No comments: