WELCOME to the fifty-eighth issue of the Bay City Post! - Keeping you updated on the best city on the grid!

I'm writing this from an airport in first life, waiting to board an overnight flight across the Pond to London, then eventually to Cork, Ireland. Yes, I work to support my travel habit, and am terribly fond of wandering and adventuring in both lives. (Speaking of, a huge thank you to the Bay City Chief of Police for his best wishes on my own personal new adventure...and for keeping the Police Station in Edgartown!)

Now, let's see what kind of adventures our reporters have been up to this month. Knowing I was heading to Ireland soon, they were wonderful at getting their copy to me early. Post reporters are the BEST. Without further ado, here's the July issue of the Bay City Post! 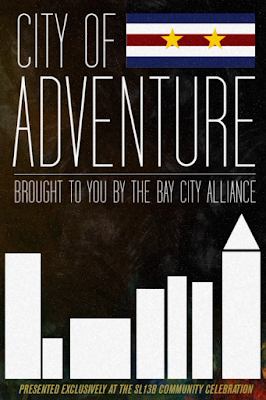 "City of Adventure" attraction highlights the city's wilder side
It is time for Second Life's 13th anniversary of exiting beta, and the annual party will be held from 19 June to 3 July. The event, Labeled "SL13," hosts a pick of some of the best of Second Life® -- and you know that Bay City is there!
Bay City's display is "City of Adventure," reflecting the "A Shared Adventure" theme for SL13B, and highlighting some of the more adventurous parts of Bay City. Features include the Asylum, the Falmouth Hotel, Hairy Hippo Fun Land, and other places on a a large 3-D map of Bay City.
As has been the case for years, the build itself also borrows from many mid-century places and technologies. The exterior is based loosely on the old Port Authority Bus Terminal in downtown New York City. Inside, it uses an "Omnimover" ride system, created by WED Enterprises for Disneyland attractions such as "Adventure Thru Inner Space" and "Haunted Mansion" at the top end of Bay City's theme years. Also, the big map of Bay City is a nod to the map of Manhattan from the New York City exhibit at the New York World's Fair in 1964-65.
We hope you'll stop by the exhibit in SL13B Spellbound before the end of the event. and explore the City of Adventure!
Posted by Unknown at 29 June No comments:

WELCOME to the fifty-seventh issue of the Bay City Post! - Keeping you updated on the best city on the grid!

It's June in our fair city, and that means summer fun: backyard barbecues, sailing out of New Port, riding the Lollercoaster at Hairy Hippo Fun Land, or just hanging out at the Blue Crystal Pool in Dennis. Speaking of pools, please remember that children - and their parents! - have lovely wading pools to use in both Morton and Maddequet, so leave those fire hydrants alone! The fire department thanks you, and so will our fire-prone city.

This month, the Bay City Post welcomes our newest columnist, Georgia Sipe, with her delightful fashion column, "Georgia's Closet". Among other things, Georgia runs Georgia's Beauty Parlor in Truro. Stop in for some juicy gossip and a great retro 'do!

June will also bring with it Second Life's 13th annual birthday party, SL13B, and Bay City will once again participate with an exhibit entitled "City of Adventure." An SLB exhibit (and the party being held there) was how I was first introduced to Bay City. I'm really looking forward to the exhibit, and to many more years of Bay City adventures.

And now, let's see what kind of adventures our reporters have been up to this month. On to the June issue of the Bay City Post!

On the eve of our 8th Anniversary weekend, the Residents of Bay City are proud to announce the following:

Thanks in large part to our donations from our annual Hot Bay City Nights and holiday Tree Lighting & Silent Auction Events, as well as the generous Linden Dollar gift from Ivan Suen, Bay City is snow listed as a Silver Level sponsor on Child's Play's website. You'll see our logo on the main page of their website, at www.childsplaycharity.org

In addition, our donation kiosks are now transferred over to Child's Play Charity. They have announced this on their website at www.childsplaycharity.org/misc/secondlife. You can learn more about the organization and their efforts there.

Bay City has long been a supporter of Child's Play, both for their mission as well as their desire to keep a low overhead: meaning more money goes to help kids in need, not "administrative costs."

"A Salute to Dynamite" Float goes horribly off course! 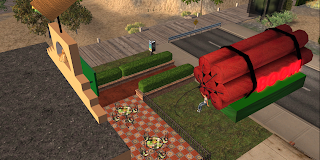 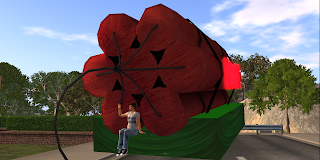 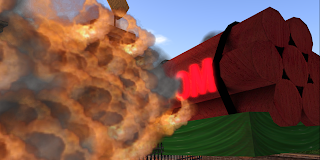 Posted by Unknown at 01 June No comments: