Labor Party, Labor Day… It’s been a long hot summer and it’s taken a lot of work to keep our pixels cool. In spite of our Hot Bay City Nights I think we’ve achieved just that. Bay City is growing and we’ve shared some hot times in this cool little coastal. Summer breezes by too fast, but it’s been one fine day here by the bay! I’d like to say thanks to all our friends old and new. Know that you are appreciated and we look forward to more great seasons full of fun and frolicks with you all!

A little ditty I found on the wall of a friend’s house I was um erm oh uh… totally not griefing if that’s what you’re getting at :o   :

No winter lasts forever, no spring skips its turn,
(edited below)
Warm with me this autumn or next summer you’ll get burned.

Oompa! We will be celebrating Oktoberfest at the Bay City Fairgrounds in North Channel on Sunday September 22 from 2-4 PM SLT. There will be fun food music and dancing… oh and BEER. Autumn fun for the whole family… come and get your polka on!
For more info contact: Ever Dreamscape 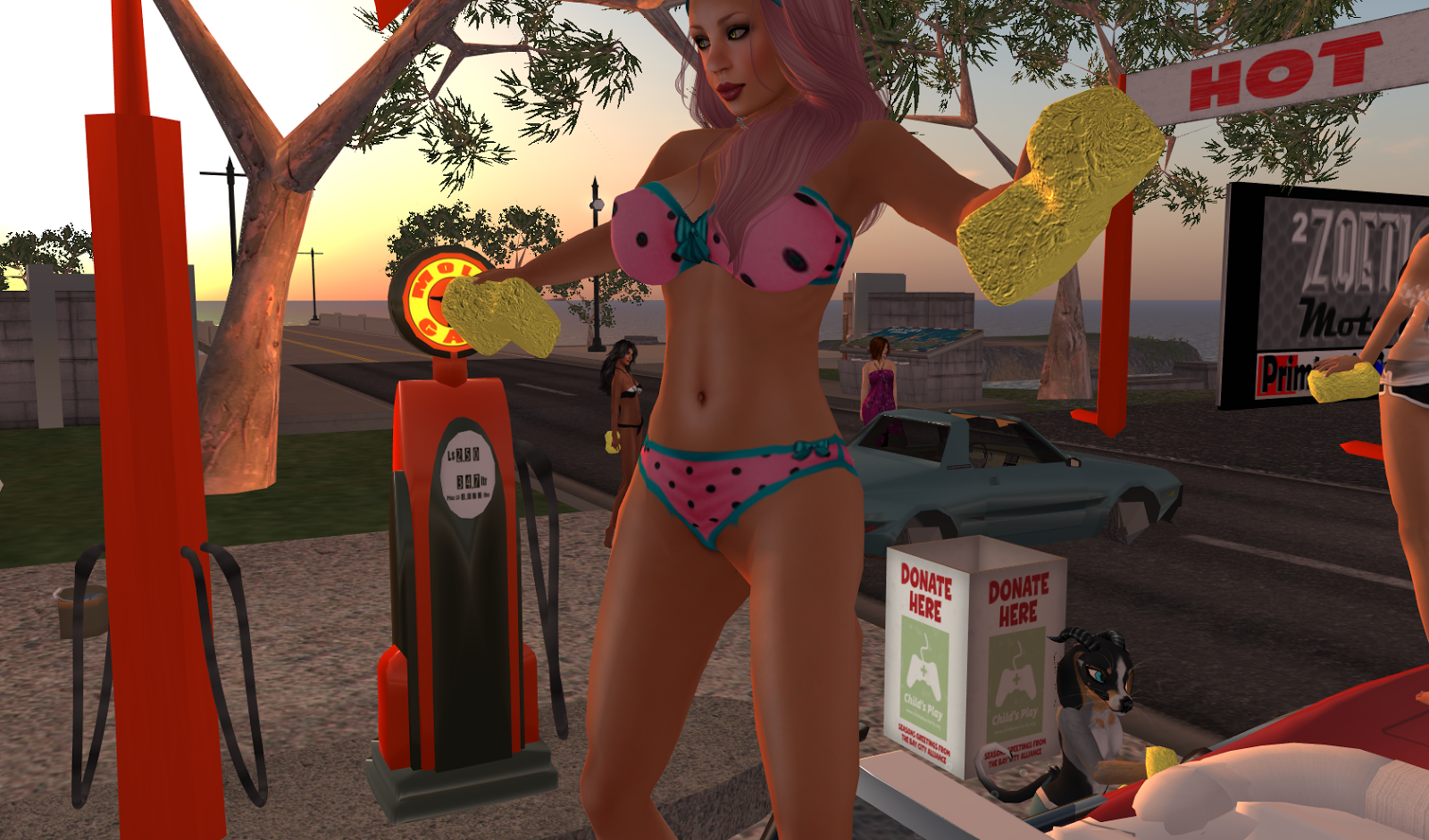 Uccie Poultry-Seale gives it her all at the Car Wash

It was August and it was hot Hot HOT! What's better than hot rods, bikinis, music, dancing, drinks and dawgs?!? Nothing! That's what!!! Bay City hosted the grid’s most Rockin' vintage auto show... Hot Bay City Nights was held the last week of August at the Bay City Fairgrounds. There were six awesome vintage automakers with cars on display, music and dancing, a bikini contest, three charity car washes, and a Bay City Alliance welcome booth. 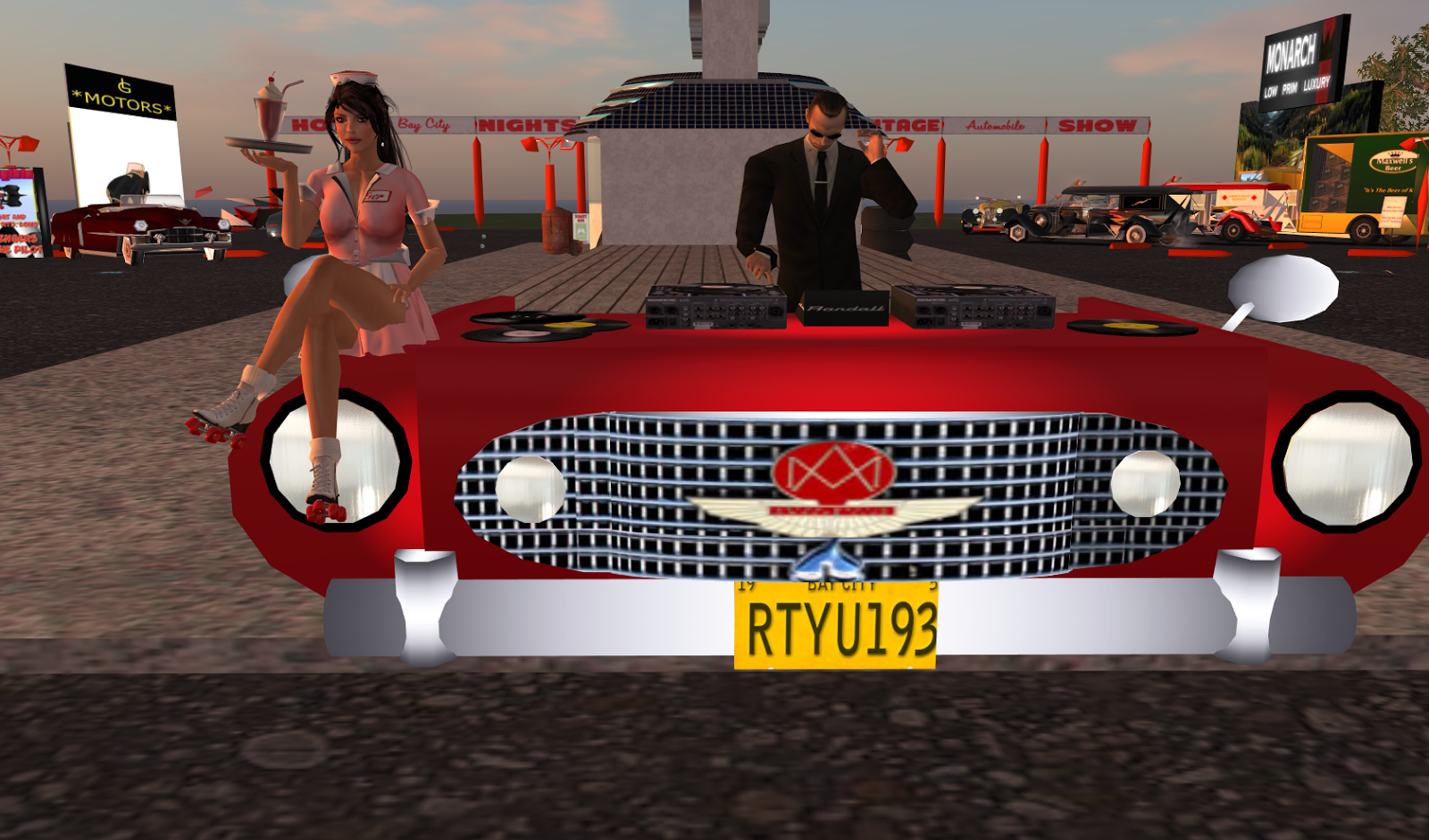 The charity car wash was held three times with hosts Benjamin Wahl, Nadia Soldya and Ever Dreamscape. Donations were raised for childsplaycharity.org, and a whopping L$83,550 was raised!!! Wow! "Your donations support seriously-ill children in hospitals by distracting them from their illnesses, and help them cope with fear, anxiety, and boredom." -Cameron Hosner - Children’s Hospital of Michigan.
We would like to thank all those who came out to the event and helped out with the car washes! 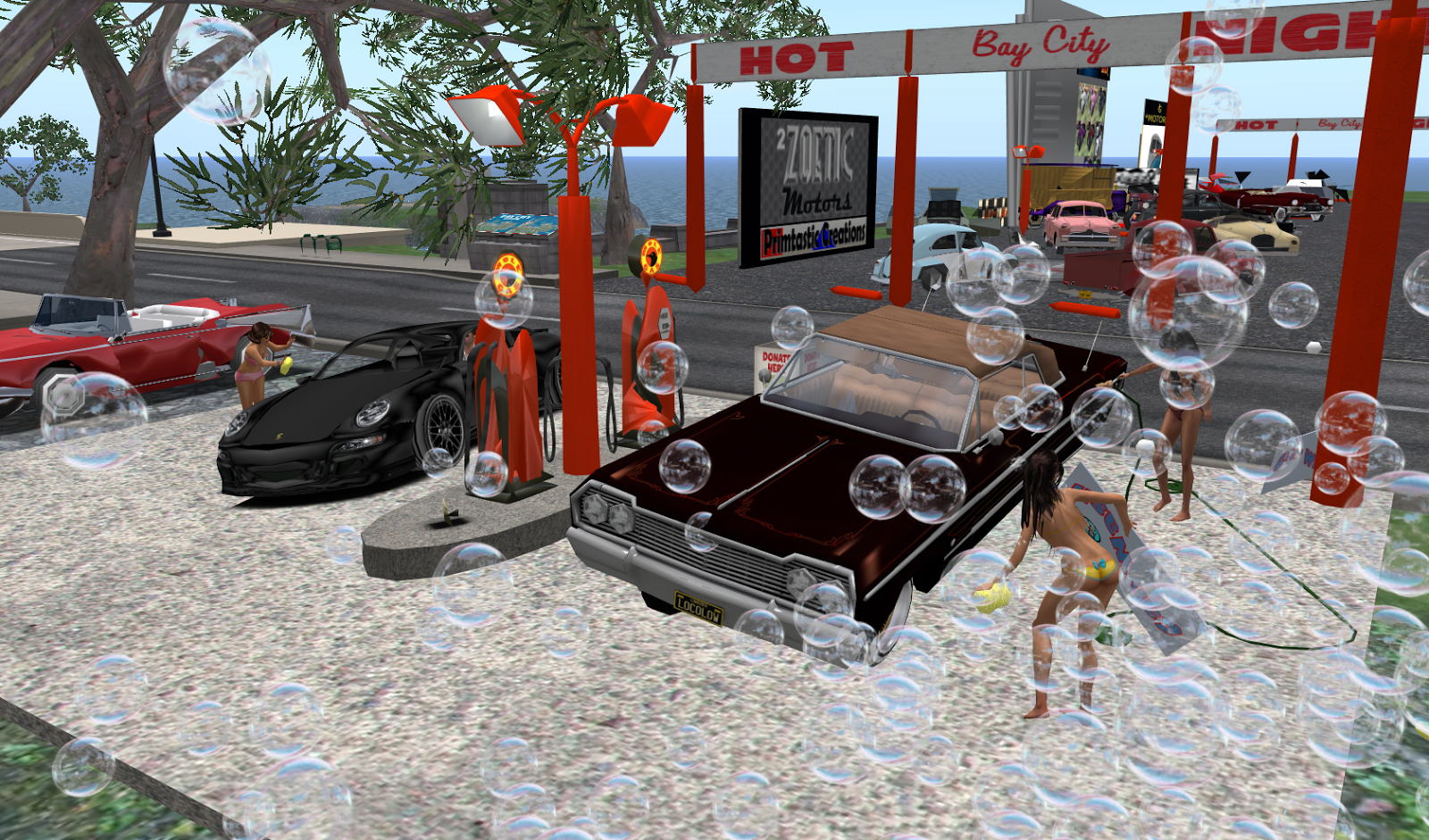 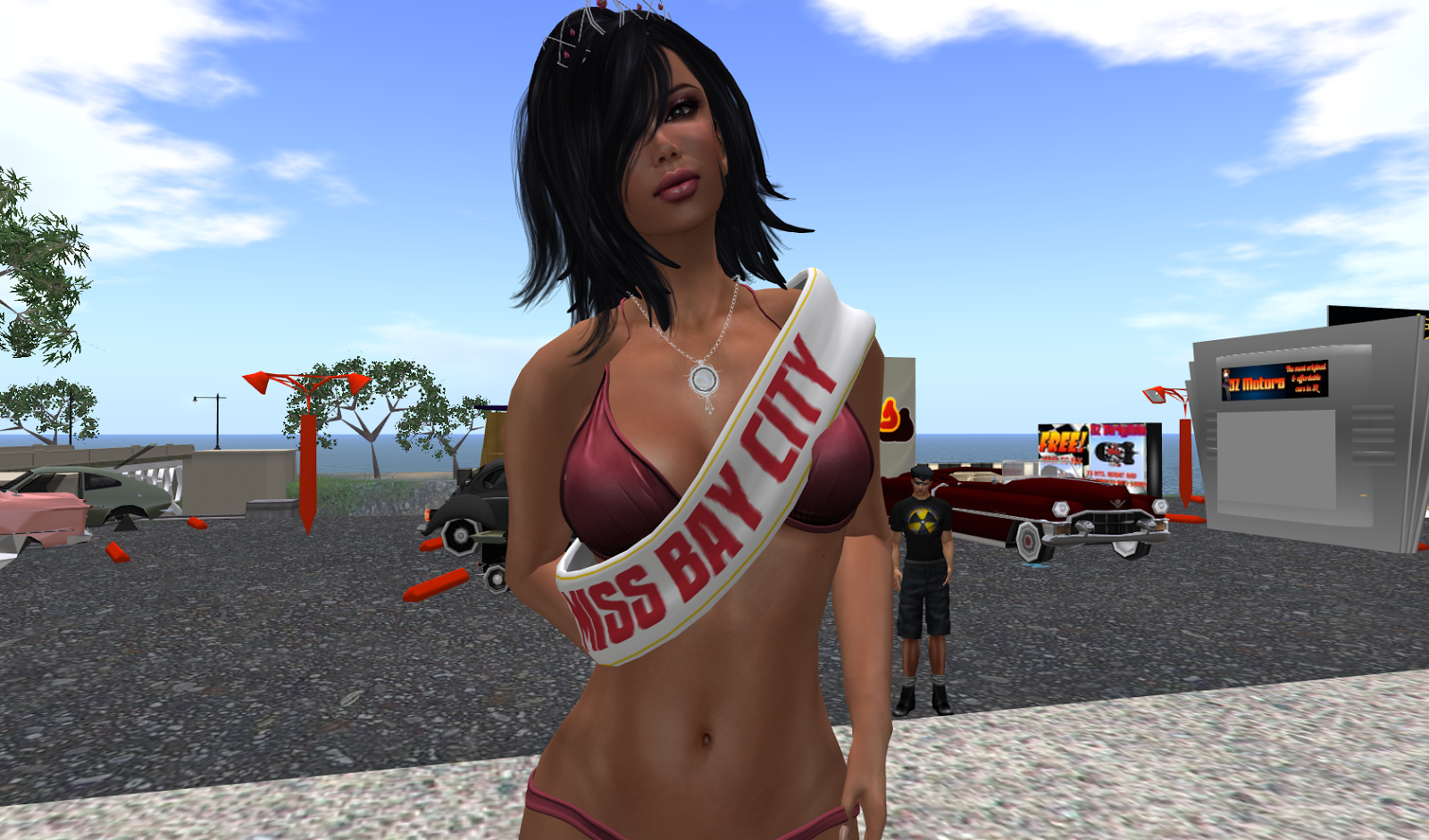 The “Miss Bay City” bikini contest Saturday, August was well attended and a panel of independent judges proclaimed Miss Tamalyn as the 2013 winner. Angela Seale- Poultry graciously passed her crown over as guests cheered on both the beauty queens. Rumors that Miss Tamalyn won due to an overabundance of insurance premiums are false.  Trust me I know this to be true as she hasn’t even purchased Beauty Queen Prize Car coverage yet!!! 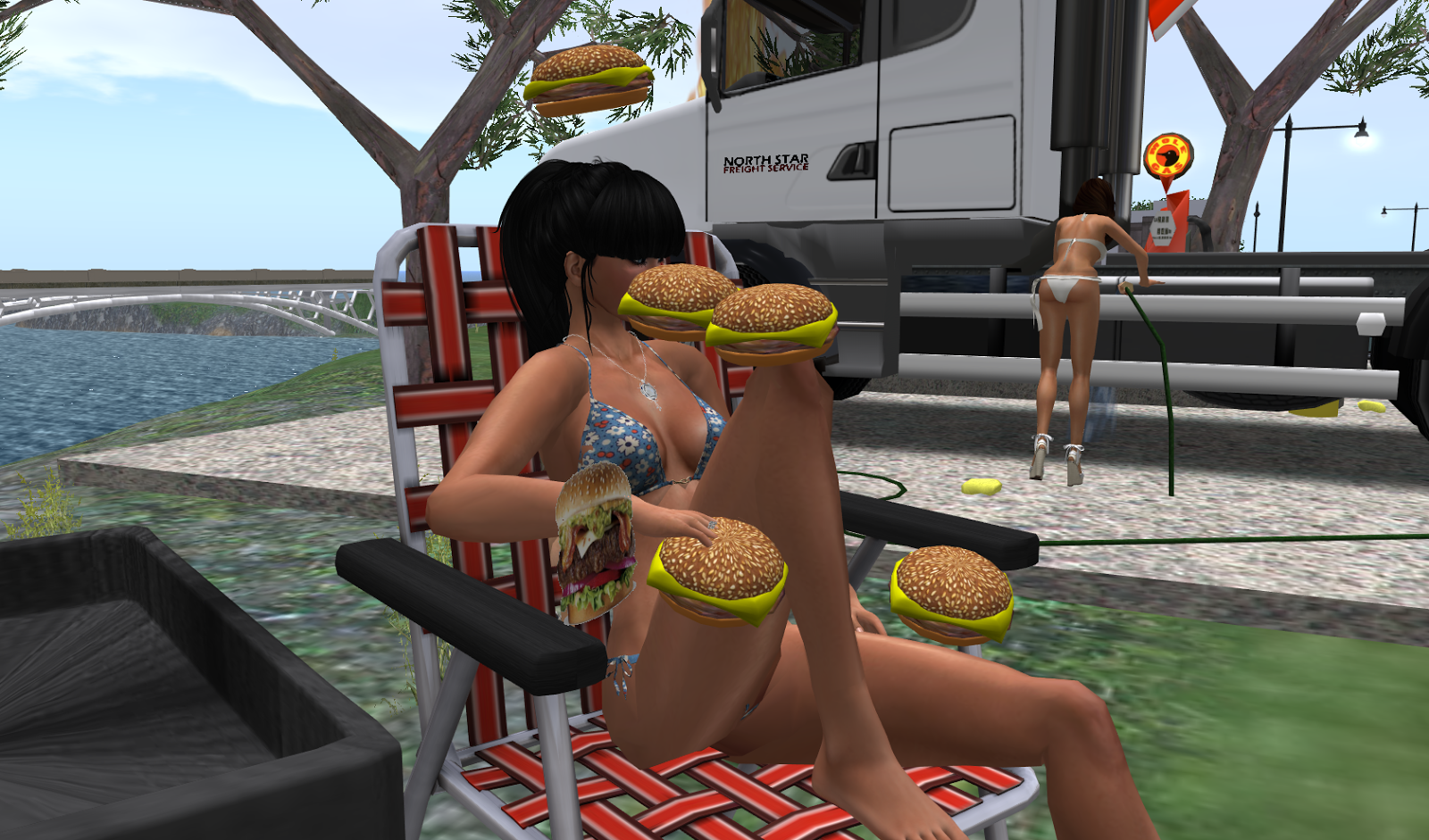 Miss Bay City enjoying a snack after the event :D

The master of ceremonies was a very stylish Pygar Bu. 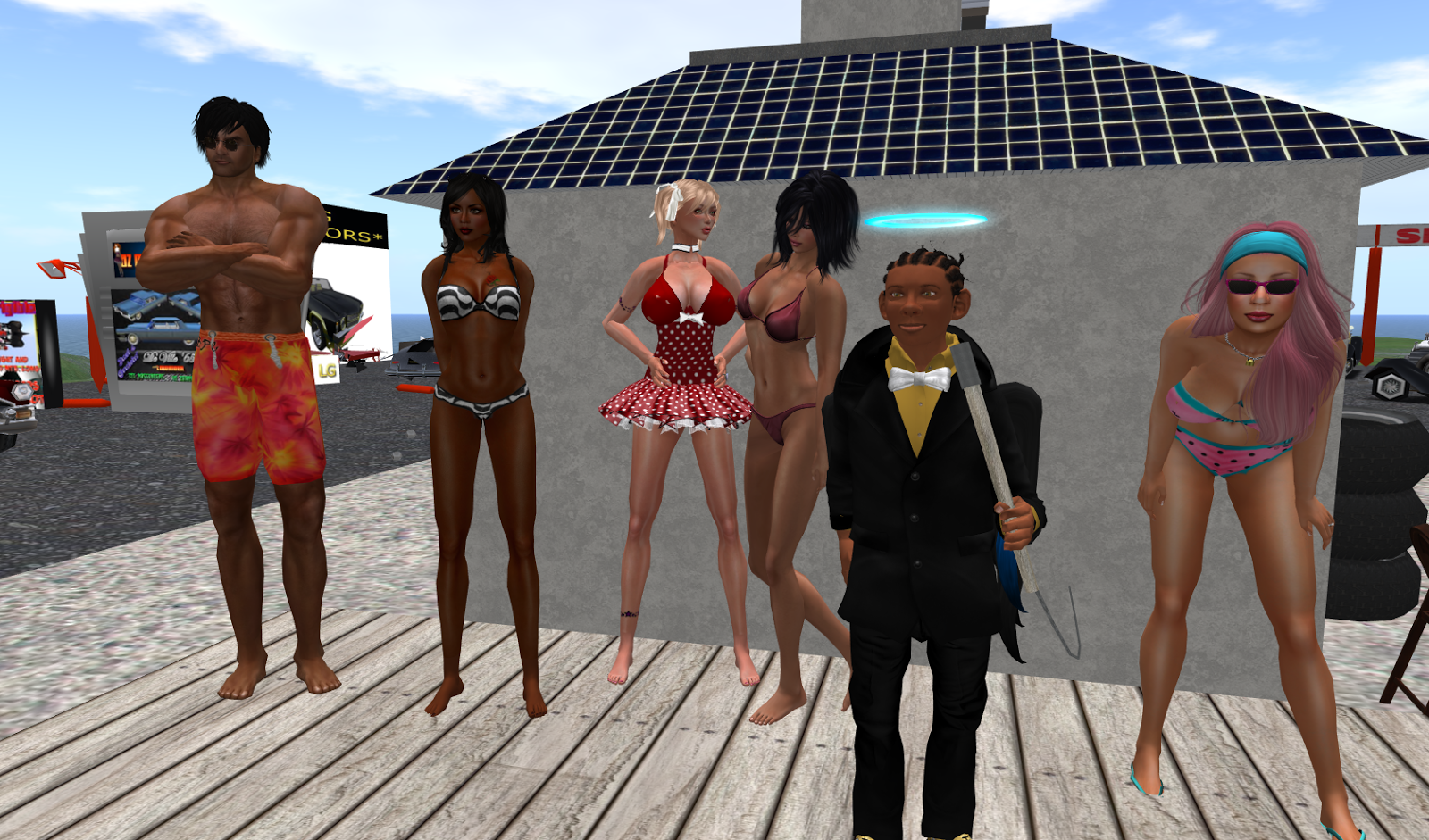 Pygar Bu with the Contestants

Isn’t it time YOU hosted a “Taste of Bay City Event” at YOUR place? Come to a Bay City Alliance meeting to find out more!

Bay City Post Online Goes Viral!
Yes the new Bay City Post blog at: http://baycitypostsl.blogspot.com/ goes completely viral (and by viral we mean somebody besides me musta looked at it) with over 1000 hits (and by hits we mean mostly me hitting refresh as I figure out how to post things) The new blog is insightful (wow really? So informed now), informative, (ya I got that already), and FUN! Go see for yourself. Really… go now! I mean it NOW Enjoy!

The Bay City Post will also continue to be available inworld at various Post boxes around the city.. so come visit the city and have a look around. 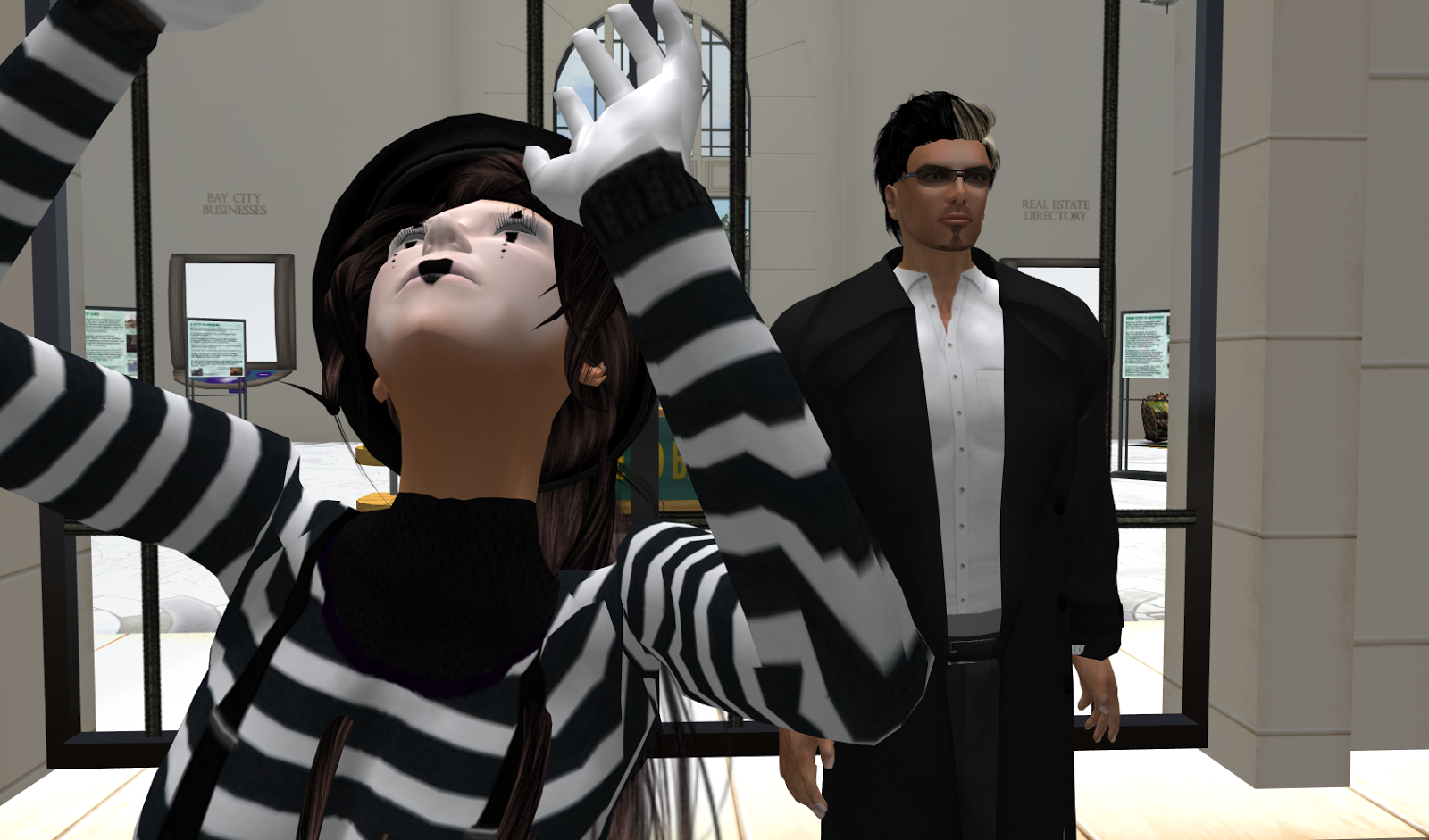 Come to the next Espresso Yourself night at the Pen September 3 at 6PM SLT to hear more!

Yep!
I “ran” into (k maybe over) Ivan Suen who has been a busy big builder in Bay City!
Ivan Suen: I'm having second thoughts about dumping a few hundred K lindens into the new Bay City Heliport.
Ever Dreamscape: hmmm heliport?
Ivan Suen: Yup,  took me a while to negotiate the landowner to sell.  but I needed a spot where it could be flown into with no fear of ban orbs nearby
Ever Dreamscape: gah ill bet
Ivan Suen: The problem with the airport is that airlines can't set up shop there :)
Ivan Suen: so the "Bay City Heliport" is essentially a partner to the larger airport, which will host up to 8 airlines or helicopter tour people. I scripted up a tour giver that narrates for you :))
Ever Dreamscape: excellent
Ivan Suen: I'd like to do this interview in two parts.  The first in my normal typing voice,  and then the second by banging by empty beer into the keyboard.   shidfhsdfasdhjusd
Ever Dreamscape: lol ya... so tell me what's going on here?
Ivan Suen: It's another commercial experiment... seeing if there's need for a heliport.  One of the challenges with Bay City is that the current airport doesn't support operations by some of the airlines such as around the Blake Sea regions.  Another challenge unique to Bay City is that our parcel sizes and road layout really prohibit a private runway (except for small private aircraft).  So similarly to how some cities have had success using helicopters, this is an effort to mirror some of those. 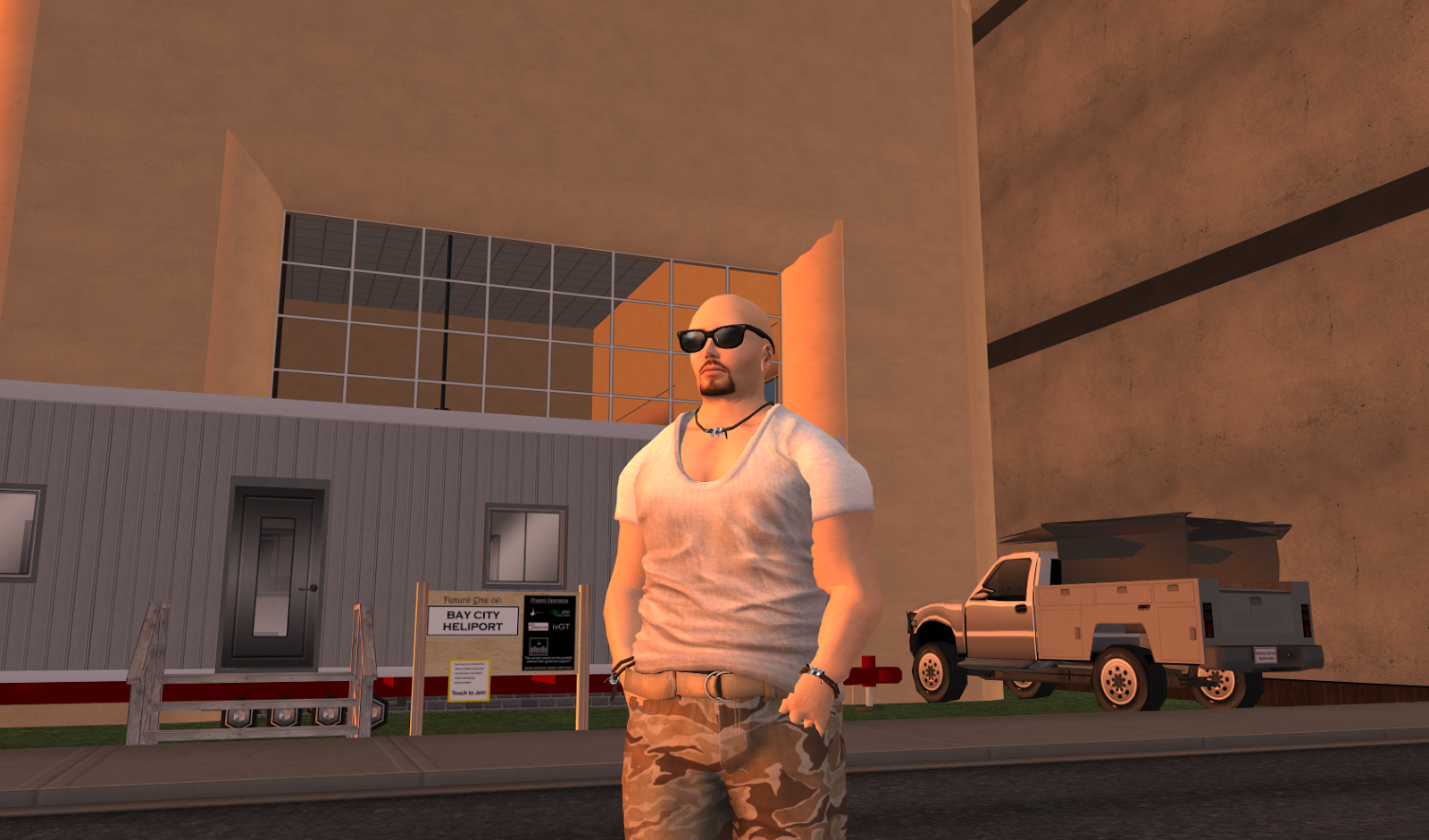 Ivan Suen: Ultimately, I'd like to see existing SL airlines have ticket counters here and fly to and from Bay City destinations as well as other locations in Sansara and Heterocera Atoll continents. This facility will also be suited for tour operators, where they can have their guests meet here and board a helicopter for tours of the City.
Ivan Suen: The inside is mostly mocked up, so don't put too much faith in it yet.  But I think the overall flow will be as it is now. Meeting space / ticket counters on first floor.  Two banks of elevators to take passengers up to the helicopter deck which can service up to three passenger helicopters at a time (such as the AS-363 or EC-135 by S&W.
Ever Dreamscape: looks great!
Ivan Suen: Thx.  It is loosely inspired by some reading on art deco architecture as well as a few design cues from the Heliport found in the World’s Fair in NYC back back in the 60s (I think the 60s).

Ever Dreamscape: so you built and scripted this all yourself?
Ivan Suen: I do a lot of building and scripting.  Although for a lot of my projects lately I leverage the prim-slinging talent of a few friends as well as technologies from Gentek and Hippo.
Ever Dreamscape: so what would you suggest people to do if they want to get involved in this project?
Ivan Suen: For project updates, be sure to click on the mailing list button out front.  To help beyond that, we're going to need some pilots that are good at flying helicopters and hopefully would want to offer passenger service or tours!
Ivan Suen: So if you ever wanted to start a tour company, get your logos, ideas, and friends together!
Ever Dreamscape: Tours would be fantastic and the location here next to the Truro Airship Rez zone is fantastic!
Ivan Suen: It's also close to the aquarium and many other FANTASTIC Bay City builds, especially some of the random great spots you can find just checking out your neighbors creations!
Ever Dreamscape: Wow thanks for the tour Ivan I hope this is a big success for you. Anything else that our readers may want to know?
Ivan Suen: And please be sure to not just get out and enjoy Bay City's Roads, Water, and Sky, but please use sensible ban lines or security devices to help everybody else enjoy the same freedom of movement :)
Ever Dreamscape: That is really good advice thank you!
Ivan Suen: Today's interview was brought to you by the letter E-tv. :)  Thanks for stopping by!