WELCOME to the fifty-fourth issue of the Bay City Post! - Keeping you updated on the best city on the grid!

It's March, and those blustery winds are bringing some changes to our fair city. Ivan Suen, long time landlord over at Northstar Properties, has decided to sell his properties at drastically-discounted rates to his tenants, and to donate all of the proceeds to Child's Play, Bay City's charity of choice. In addition, he has transferred the Bay City Heliport to a group of people who love both Bay City and SL aviation (see story below). While Bay City (and myself in particular!) will miss Ivan's creativity, sharp sense of humor, and dedication to Ever-like mayhem, he has promised to stop by and visit the builds he is leaving behind, namely the Bay City Brewery and Club Sandwich.

March is also bringing a change to the Bay City Post, as I will be taking over editing responsibilities from our esteemed (not the) Mayori and Interim Editor, Marianne McCann. Sitting at the editor's desk in the Post offices tonight, I can see the fires burning at the driving school across the Plaza, and can see Ever Dreamscape's smiling face on the billboard above it. I hope to show that Ever's spirit of playful creativity and organized mayhem is alive and well in our fair city, and shining through these pages every month.

And so...on with the March issue of the Bay City Post!

The Toxic Taco's attempt to make their own "extra thick shamrock shake" leads to disaster!

Congratulations to Bay City's own TJ Hooker, proud new owner of the Bay City Heliport.  He and I are in the process of transitioning the land group, but I am happy to report that Bay City will continue to have multiple places to fly.  -Ivan Suen 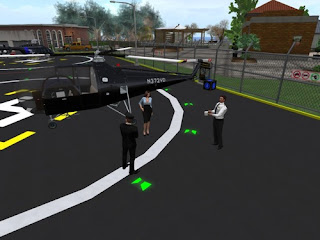 In photo above, TJ Hooker, Silvia Hooker, and Brian Hackett discuss plans for the Heliport

Prior to the passing of Ever Dreamscape, as her health was deteriorating, she met with me over at the Bay City Post. The upshot of that meeting? I would be the new editor of the paper in her absence. At the time, it was assumed it would be a temporary assignment, but the fates had another idea.

I expressed concerns with her, knowing that my own schedule is always perpetually overloaded. This was just one more plate for me to spin, and I was already more than over loaded. Plus, knowing I already head the Bay City Alliance, it seemed to me that it would be better with a another voice in the mix.

So I have always looked at myself as an "interim" editor, hoping to find a new voice to take on the role. I am proud to say that we have indeed found such a person, as Kinn takes on the duties of editor of the Bay City Post. I am sure she will do a fabulous job, given her own writing on the Mainland Matters blog and elsewhere.

I'll still be around, of course, providing Molewatch and other needs around the paper.

I'm proud of what I did manage to get out under my watch, including a fairly involved cleanup of the Post website, but I think everyone will benefit by an editor who can truly build the paper in a more timely fashion.

(...and be sure to fix the editor's chair. Those casters are terrible!)

Posted by Unknown at 29 February No comments:

WELCOME to the fifty-third issue of the Bay City Post! - Keeping you updated on the best city on the grid.

Love is in the air!

Bay City Post time again, y'all! Welcome to the best bid-cage lining your Linden Dollars didn't buy! It's February, and Winter is soon to give way to spring. I look forward to warmer days ahead.

We've got an action-packed issue this time out, with ThomasHooker taking over Kinnard's police blotter, and some great outings from all the usual suspects around town!

Enough from me for now, let's delve into da Post!

Being a good neighbor

One of the unique challenges in a community like Bay City is that there is no covenant. There is nothing prohibiting your next-door neighbor from deciding they need to build a 20 story charnel house, nor a floating space port full of breedable ewoks.

It is not a common occurrence for things this outside the Bay City theme to wander in, but there have been plenty of other odd structures in Bay City, even from the city's earliest days. It can prove frustrating -- especially for those who have taken the time and care to make something within theme -- to find they're now next-door to stonehenge.

Bay City is mainland, and does not have a covenant. We do have a set theme ("the American urban experience, between 1940 and 1965, perhaps best typified by Chicago circa 1950 and marked by a distinct deco influence"), but it is a guideline, not a hard rule. If you own a parcel, you get final say of what is there, barring violation of the Terms of Service, maturity guidelines, or the Community Standards.

The Bay City Alliance does offer one tool for new Residents of our city, and I hope that people do consider the use of it: our welcome basket is full of tips and suggestions, including building tips surrounding the city's theme. You are certainly welcome to pass it along to anyone in the city. Maybe when you do, you'll find a kinship, and you can both work on something that will make Bay City better... together.

The thing is, keeping one's structure within the them is better for all. It allows you to keep the value of your property up, and makes everyone look good. Putting up something heavily out of theme, conversely, drags it down for everyone surrounding you. It's simply a case of being a good neighbor.

Posted by Marianne McCann at 04 February No comments: