WELCOME to the thirty-first issue of the Bay City Post! -Keeping you updated on the best city on the grid.

Good evening… tonight I’d like to offer you a special treat… a pain in the NECK! (Shouldn’t that read bite?) anyhow… Creepy Crawlers Batboy it’s October already! Let me smell ya about all the fun we’re going to have. We’ve got your ghouls, we’ve got your ghosts, and we’ve got goblins a hob knobbin’. We’re gonna make hey where the sun don’t shine. At the hay maze in the fairgrounds silly! So scary up some pixels as there will be some spookalicious goings on around this best little town. Its autumn in the city and that aint no pity ditty… it’s looking quite pretty.

If you dare to come we’ll scare up some fun. Happy October!

Ever Dreamscape, Editor
Posted by Bay City Post at 01 October No comments:

IN THIS ISSUE
Upcoming and Future Events
“Molewatch” with Ace Reporter: Marianne McCann
Public Service Announcements
“Cheeky Geek” with Qie Niangao
“The Interview” Join Uccie Poultry-Seale as she interviews Roc Plutonium
"Curiously Curi" with Curious Hazelnut
“The Race Report” with ADudeNamed Anthony
All that ...and yes the Weather!

Sources let on that Halloween will be held October 31st this year. In accordance there will be a party at the Hallowe'en Hay Maze (which will be open early mid-month thru Halloween) at the Bay City Fairgrounds in the North Channel http://maps.secondlife.com/secondlife/North%20Channel/155/185/37. The party will be from 6-8 PM SLT and feature dancing and Bay City favorite DJ GoSpeed Racer! Family FUN for all!!!

Rumor also has it that in addition to Marianne McCann and Pygar Bu; the Lindens will be helping to spook up the fairgrounds and city. \o/

*There will be no Bay City Rumble on that night to make room for the party.

Oktoberfest!
Oompa! We celebrated Oktoberfest at the Bay City Fairgrounds on Sunday September 22. There was fun, food, polka music with DJ rtyu193, … oh and BEER. All under the big blue and yellow tent. Thanks to Marianne McCann and Pygar Bu for another great build, to the Bay City Alliance for hosting this event, and to ALL the great guests who came out and polka’d their pants off!!!

This is where we usually have stories about tornados and other Cat tastrophies in and around our fair city… oh page 10 you say? Don’t forget to keep up those insurance payments folks. Jus’ sayin”
Visit the new Bay City trailer Park here:

Yes the Bay City Brewery has been reassembled and is back in its former location in Argos, on Route 66, and across from the Bay City Department of Sanitation. Chief Brewmaster Ivan Suen has created some signature brews (and by signature we mean we’ll be needing your signature on a waiver before drinking any of the brew). The Brewpub is now open to the public, and is featuring live DJ’s on Most Saturday nights, some Fridays and occasionally after the Bay City Rumbles on Thursdays.

*Although some speculate the location adjacent to the Sanitation department is the cause of the signature green beers glow. We say… It’s Something in the Water!!!   ;/

With the advent of advent… wait what? That’s a different month?? Ok lessee. With Halloween just around the corner, the moles are again coming to town to enhance some of Bay City’s spookier prims for your pixel enjoyment. Let’s help welcome people with some avatastic entertainment and visit these sites to greet our ghoulish guests.

Seriously I myself love to role play and/or do a little “performance art” at the South Channel Asylum, the Falmouth Hotel, and at the hay maze in the Bay City Fairgrounds. It’s fun to dress up and “play” the role of a lunatic, a ghosted bell hop, a wicked witch or giant spider and more. So how ‘bout we costume up and make these builds come alive as guests pour into the city?! 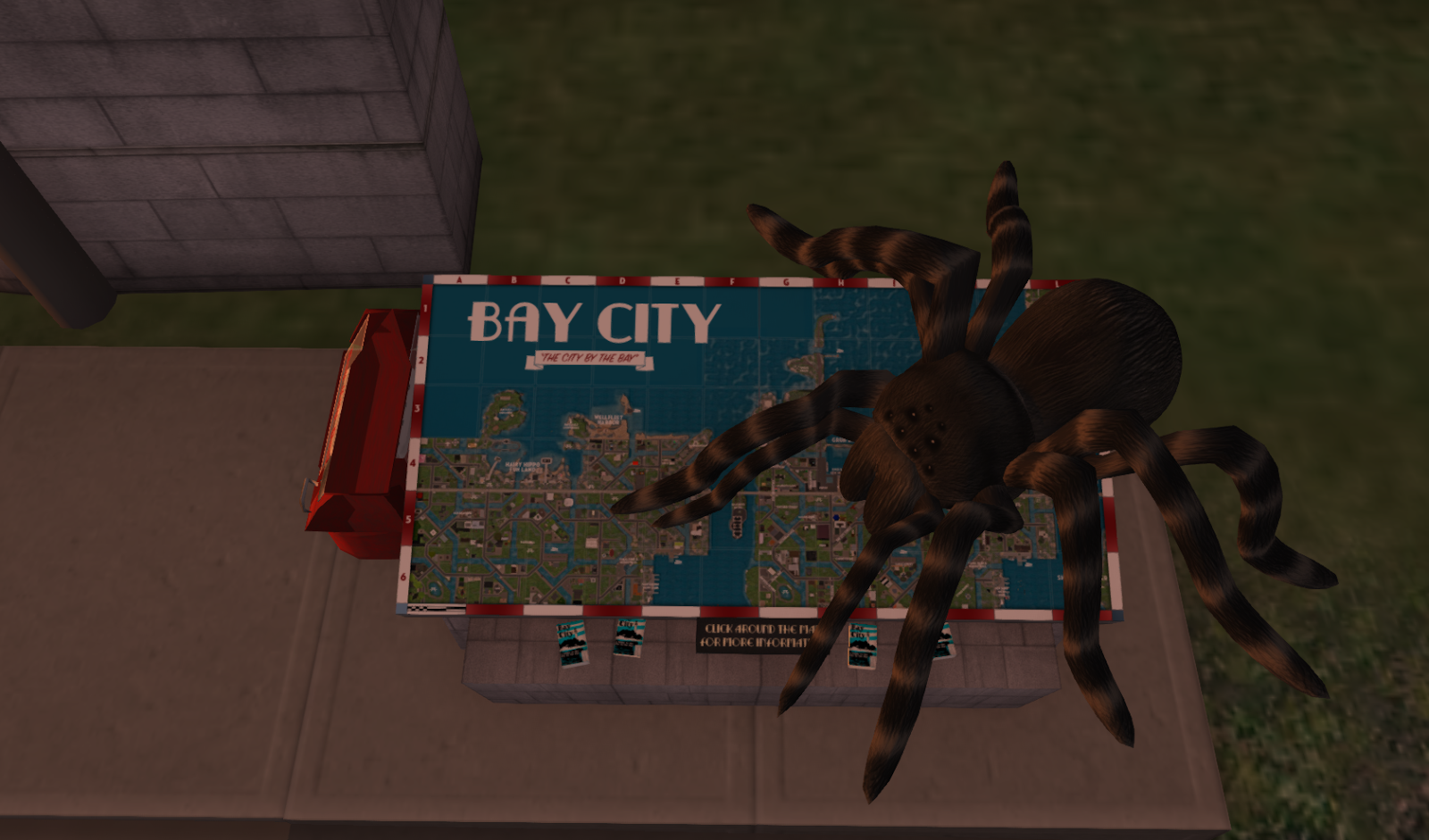 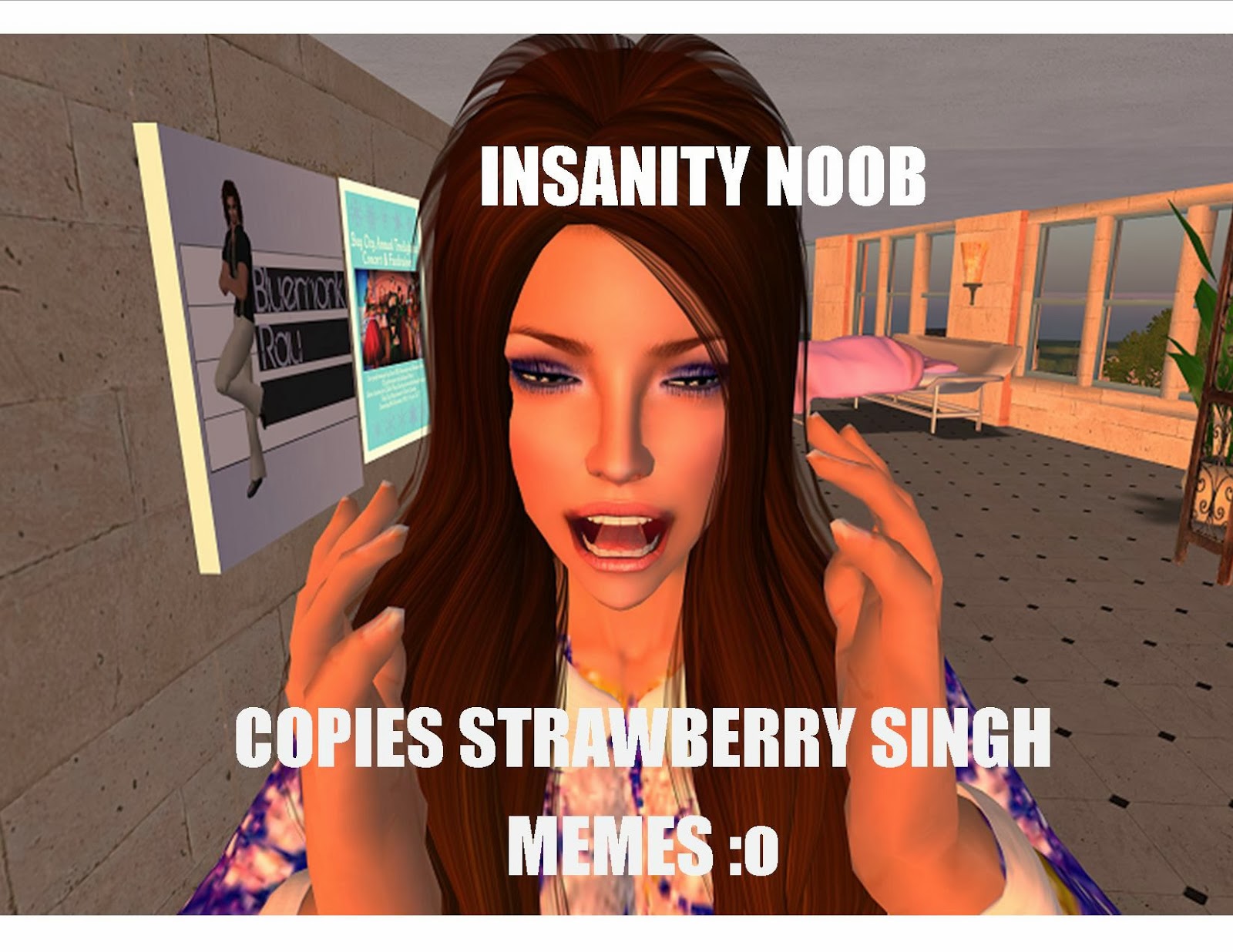 Goblins turn to gobblers come November in the ‘states. :o

Stay tuned next month….  as we make up more stuff. (Wait this wasn’t real news?!?)