History: The Road To Bay City Part 3: The taxman cometh 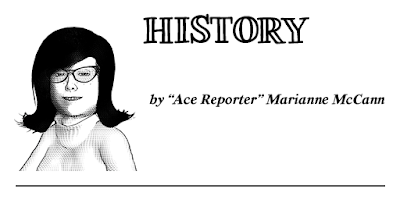 After the limited success of Lindenberg, many initiatives to help form communities in Second Life were undertaken by Linden Lab.

One of the first was the creation of a collaborative Linden and resident building project -- known as a "Resident Work Project" -- that led to Wild West Town. This was a volunteer project formed by Linden Lab, where a select group of residents could help build a frontier town, including a theater, a saloon, a general store, and so on. In exchange, the resident contractors could be rewarded with a few thousand Linden Dollars!

Originally located in Clyde, Wild West Town later became a predominate feature of the Oak Grove region. Largely destroyed due to prim rot and weapon damage, Wild West Town was rebuilt by the Linden Department Public Works as one of its earlier projects.

Another project was the amusement park, named Linden World -- not to be confused with the early name for Second Life -- located in the Coney and Luna regions. This project invited residents to take a parcel and build some modest amusement park like attractions, even later reserving half the land in the Coney region as Linden-owned. This meant Residents could have double the usual land allotment (prims). A shade of the late city regions.

Linden World survived briefly, with Luna later becoming the mall that exists today below Nova Albion, and Coney sinking below the void sea.

Around the same time, the notion of a "Resident Work Project" changed, making way for an initial round of themed community proposals. Of these were Nexus Prime, the Kazenojin aviation community, Darkwood, Yamato Town (also known as Shangri-La), Venice, Kissling, and Americana.

Nexus Prime, a cyberpunk city located in the Gibson region, has gone through many rebuilds since its classic community look, but none have lasted long. Likewise, the Venice community, devised as an inworld version of the classic Italian city, was wiped out several years ago from its site on the banks of the Bonifacio region.

Darkwood, a fantasy city, still remains to the northeast of Nova Albion, and the Kissling community lives on north of the Luskwood, itself an early community. Even Kazenojin in Gray and Asian-themed Yamato Town in Dore, continue on, albeit the former is largely quiet now while the latter became an orientation station, and unfortunately lost large amounts of its content.

Then there was Americana. 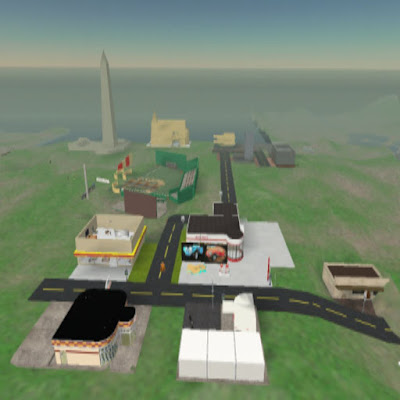 The Americana group, founded by a Resident named George Busch, claimed the Blue region in June 2003 as home, building a number of America-themed builds as part of their community. a "Route 66" led into the build, featuring a Woolworth’s, an A&W root beer, and other structures to evoke a classic 1950s-era America. 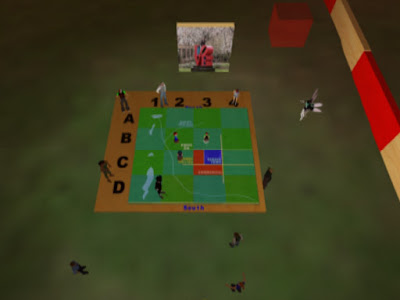 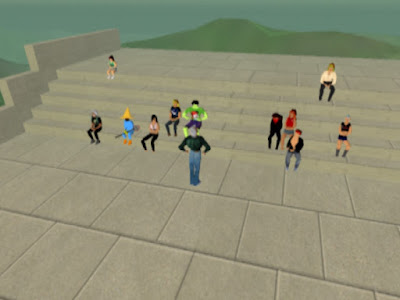 As the area grew, it featured even more impressive structures, including the Washington Monument and the St Louis Arch, as well as a baseball field called "Fanway Park." 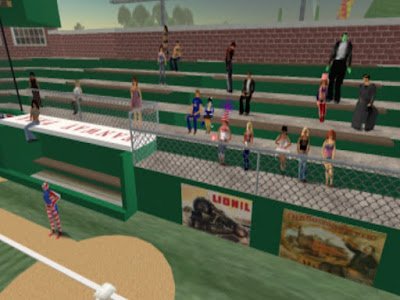 Not all was perfect in Americana, however. the group often had conflicting views of their home region, leading to discord among the group. Even with the rancor, however, Americana's builds were considered some of the best of their time. 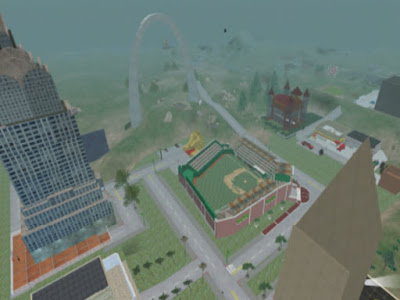 But one thing held the community back more than any internal strife, and it was an issue that seemingly underscored their nostalgic American theme: taxes.

At the time, rezzing a prim cost L$10 for each you chose to rez. As time went on, the cost grew, including additional fees for prims not located on the ground. It was things like rezzing that meant a lot to the Second Life economy.
The Americana group, by and large, pushed for a tax revolt, creating tea crates to evoke the Boston Tea Party, and threatening the destruction of their builds throughout the Blue region. A report in New World Notes from the era includes an interview with Fleabite Beach, the first furry in Second Life and the leader of the tax revolt.

The following was the text of a notecard that was sent to Philip Linden and others interested in the Tax Revolt, and discusses Fleabite Beach's initial experiences with Americana. It is presented as written, with typos intact for accuracy and style.

"THANK YOU
From the bottom of my fuzzy heart, I, Fleabite Beach, thank YOU, my friends and sim-mates, for the outpouring of Empathy and Concern for our way of life and our pre-destined March Towards Freedom...
Freedom to pursue the noble cause of self-governance
Freedom to pursue the arts and sciences that define us
Freedom to pursue the charitable ways that enrich us all
Freedom from Taxation Without Representation
Who amoung us has not YEARNED for the realization of their previously unattainable dreams, here in SL?
NOT A ONE
Who amoung us has not ACTED at times towards the realization of those most heartfelt and cherished concepts?
NOT A ONE
Who has profited from the lifetimes of open hearts, minds and backs of these Dreamers?
JUST ONE
THE MAD KING GEORGE LINDEN
...
Ironic in a way, to look back to when I first signed onto SL in the glorious, uproarious beta days.  I had rushed through the tutoiral/noob isle process and was desperate to EXPLORE THE NEW WORLD like a pixelated Colombus.
The first person I met was also named George.  Not Washington as one might suppose, or even IMPOSE of him as I do....
His name was George Busch and he build a very nice little monument.  The Washington Monumnet.
And he built a nice little service station, and a nice little community called Rt. 66 and perhaps, unbeknownst to him, a nice little UNDYING PASSION here in SL....
a nice little thing WE like to call
AMERICANA
For Americana is not just a perfect square on your map.  It is a perfect square in our hearts as well.  Thanks to George.
I knew George Busch.
George Busch was a friend of mine.
And Mad King George,
You're no George Busch.
...
Merriman Brightwillow has inspired me to TAKE A STAND with BOXES at all my FLEABILT PARKS SYSTEM PARKS.  Instead of a large number of free, open-source, full modify, public domain fun, visitors can enjoy SINGLE PRIM TEA CRATES.  They will be a TAX STAMP available for $100,000 linden dollars to shoppers, so STEP RIGHT UP!
Thank you Merriman for the inspiration and thoughtful consideration of the subject
WE my friends, can learn from our past but
WE can only move forward hand in hand.
WE stand untied for Liberty and Freedom, and
WE believe these truths to be self-evident
WE ARE AMERICANA
JOIN US
FREE TEA at the door
...
As REPRESENTATIVE and founding member of the COLONIES and AMERICANA, I Fleabite Beach do Hereby Enlist and Recruit to Protect and Provide Service in love of COUNTRY, to the UNITED COMMONWEALTH and ACTIVE MILITA of AMERICANA, the following patriots:
Rep. RAMON KOTHARI
Rep. CROWCATCHER VALEN
Rep. BONECRUSHER SLATE
PITUCA CHANG
GARTH FAIRLIGHT
JAI NOMAD
DRAGON CROSSING
NICOLE MILLER
TRACEY KATO
AURELIE STARSEEKER
MERRIMAN BRIGHTWILLOW
CHARLIE OMEGA
MAC BEACH
DEREK JONES
To join the ranks...reply to this post or see one of the AMERICANA REPRESENTATIVES
Love,
Your Loyal Subject,
-Fleabite Beach"

The release of Second Life 1.1 in October 2003 included methods to prevent tax evasion, and Americana was doomed. The build was destroyed, as the creative minds of Americana opted against continuing to be taxed over their builds. Americana was no more.

While Americana remains no more, there are elements of it an eagle-eyed observer can spot today.

At Valen's Creche, a build to the north of the Lusk region and above an area we'll talk about in the next issue, you'll spot the St. Louis Arch from Americana, as well as a selection of snow globes for sale as souvenirs of the old community.

In Blue, on a micro parcel, you'll find a slide show of photos featuring Americana, as well as a Route 66 sign. You can see this very sign in one of the above photos, in front of a gas station.
There's one larger tribute to Americana today.

Fleabite Beach would later become Blue Linden, a long-time community liaison and, eventually, one of the first members of the Linden Department of Public Works. One of their first projects? A city focused on the "Urban American Experiences" featuring a "Route 66" cutting through the middle of it. That project? Bay City.

Let's not get ahead of ourselves, however.

Part IV will make a small sidetrack, and talk about how housing communities have come and gone in Second Life.