WELCOME to the twenty-seventh issue of the Bay City Post! -Keeping you updated on the best city on the grid.

Hi Ever Dreamscape here, and I’m here to tell you all about our all new all improved totally awesome absolutely amazing biggest and best ever, you won’t want to go another year without one… of our very own Bay City’s… month of June! We’re gonna rock you we’re gonna roll you we’re gonna shake you up we’re gonna shake you down, we’re going to spin you right ‘round baby right round! We’ve got events inside the city, we’ve got events outside the city, and if that’s not enough we’ve got places to see, people to be, and incredibly… there’s always weeeeeee!
But wait there’s more!

So come to a rumble even if you tumble, espresso yourself or grab a book from the shelf, come to a meeting, there’s always a friendly greeting, have a cruise around town we won’t let you down, come snack on some cookies or pay off your bookie, it’s quite safe to say you can even role play. You say you want weather? Our windlight’s never better. You’re short on grief? We can offer relief. You like pretty prims? Come visit our sims. We’ve even got the freshest mesh around. Don’t miss out! Come enjoy your own, highly customizable, one size fits all - June! Unlike our competitors (we have competitors?) we won’t sell ya one, we won’t sell ya two, we won’t sell ya three,…. After all quantities ARE limited. You just need your one and only totally awesome Bay City: two -thousand and thirteen edition- June! Get yours today! (Taxes and restrictions may apply, shipping and handling are extra).

Upcoming and Future Events
“Molewatch” with Ace Reporter: Marianne McCann
Public Service Announcements
“Cheeky Geek” with Qie Niangao
“The Interview” Join Uccie Poultry-Seale as she interviews Fujiyama Yokosuka
“The Race Report” with ADudeNamed Anthony
Sylvia Tamalyn, “Minds Our Business!” - Listings that is!
All that ...and yes the Weather!

BAY CITY, SL (1st May, 2013) - In May of 2008 the Linden Department of Public Works unveiled its first project, the themed city area on the Second Life™ Mainland known as Bay City. Now, as Bay City turns five, its community invites everyone to join us in celebrating this milestone.
Anniversary celebrations kicked off at noon on Sunday, the 19th of May, with a parade lineup at the bandshell in Bay City - Harwich. The parade will made its way down Route 66 and concluded at the Bay City Fairgrounds in the North Channel region.
A live concert kicked off at the Fairgrounds, and featured Christov Kohnke, CelticMaidenWarrior Lancaster, and RoseDrop Rust, and including GoSpeed Racer of KONA Stream providing music leading into the event.
We had a big crowd of Second Life residents participating. Celebration goods were available at the Bay City Community Center, and there were numerous people along the route cheering on participants.
*Bay City is a mainland community, developed by Linden Lab™ and home to the Bay City Alliance. The Bay City Alliance was founded in 2008 to promote the Bay City regions of Second Life™ and provide a venue for Bay City Residents and other interested parties to socialize and network. It is now the largest Bay City group, and home to most Residents of Bay City.*
A BIG thanks to all those that helped make this year’s celebration a BIG success….
Our great entertainers: GoSpeed Racer, Christov Kohnke, Celticmaidenwarrior Lancaster, and Rosedrop Rust !
The Bay City Alliance!
Marianne McCann for such a terrific build and all her work organizing this event!
Our parade leaders and helpers!
The great donors who helped pay for this gig :D
Linden Labs for building this fine city!
The LDPW and the Moles for making it super special!
Wonderful bloggers, writers, and photographers for spreadin’ da word!
All our friends and neighbors for coming out! 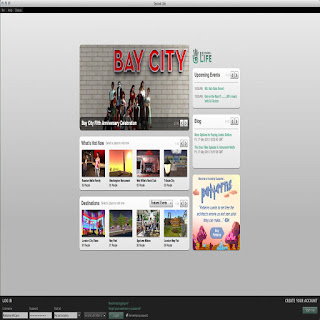 Second Life turns ten this month. Yes it’s true, and this party is going to be a whopper! This year, there will be 20 sims cram-packed with art, exhibitions, information, and events. Bay City has their own display with a new exciting build courtesy Marianne McCann. Look for event announcements in the Bay City Alliance group notices and come on down to greet and represent!
You can follow official SL10B chatter at their website here: http://slcommunitycelebration.com/

The Pen proudly presents Espresso Yourself night, every first Tuesday of the month from 6-8 p.m. SLT.
What is "Espresso Yourself?" It's a chance to take your spot on the stage and share. Tell a joke, share your poetry, read a chapter from your favorite book, sing a song. Just share! Voice or Text. No mimes. Talent not required, but passion is mandatory.
The Pen, located in the heart of Bay City - Mashpee!
http://maps.secondlife.com/secondlife/Bay%20City%20-%20Mashpee/76/48/26

Isn’t it time YOU hosted a “Taste of Bay City” event at YOUR place?!?
Come to a Bay City Alliance meeting and find out more!

Barwash Goes awash Over Lack of Suds at R Pub

What a mess!
Overheard in Harwich was the owner Ms. Sylvia Tamalyn saying: “I just don't get it!”. Hope she didn’t get all lathered up trying to clean the mess. Here's wishing Sylvia, and all the folks at the R Pub lots of good luck!

Have a nice day! 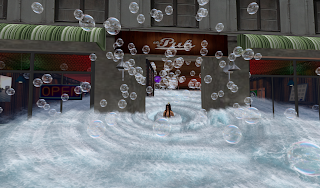 An unknown assailant wickedly vandalized the Post office last weekISH by defaming the pictures of our oh so-so very refined Post staffers. Sadly, we had to take drastic measures and totally randomly rezz security cameras around the Hyperbole Tower where the Post is now located. Don’t let this happen to you! 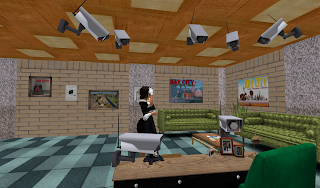 Editors Note: Uccie… you forgot the picture of our Patron of the pArts, Roc Plutonium… better luck next time ;D

-and now for my singing pleasure…..

Blue June
You saw me rezzing at home
Without a stream in my heart
Clouded, without a shape of my own
Blue June
You know just what I had logged for
You read my updated blog for
Someone I really could alt for

Yes the new Bay City Post blog at: Bay City Post goes completely viral (and by viral we mean somebody besides me musta looked at it) with over 100 hits (and by hits we mean mostly me hitting refresh as I figure out how to post things) as the new blog has been quite a sucess. Go see for yourself. Really… go now! I mean it NOW (the next article is pretty dumb anyhow). Enjoy!

The loon in June sings mostly on the moon…. and nearly always in tune :o

Share if you will ... what summer activity(ies) you look forward to most...and I'll share them with our Bay City Post readers. Thanks in advance!!! :D
vick.forcella Sun. I'm told it still is around somewhere. I just want to look at it and feel it's warmth.
sylvia.tamalyn Mari's fireworks shows! \o/
rachel.seelowe I am wishing and hoping for some Loller Coaster action!
uccello.poultry I agree with Sylvia about Mari's fireworks. Also in SL, I plan on hitting more beaches. Nothing planned for RL.
pygar.bu there is a rumor about camp registration coming up soon.... :-D
ever.dreamscape Thanks guys n gals! Great stuff to be looking forward to!! I'll be seeing you there!!!:D

*
Remember Folks; the Bayjou Theater plays machinima around the clock. What are you waiting for?? Cozy Winter Fun!

Hot Balls! Who doesn’t enjoy a night out with the gals, guys, furries, tinies, vamps, etc etc tossing balls around? Bowling fun for everyone! Mashpee.
Hairy Hippo Fun Land for all your FUN needs! Located in Oak Bluffs and Weston; if you haven’t tried the food challenge … well what are you waiting for?!?

Looking for a stream to listen to?
Check out:

For more fun check out:

THE PEN
Hey all you cats and kittens, focus your audio on this: The Pen, Bay City's newest and only beatnik hang-out, is now open! Grab a cup of java juice and jungle up in our shack! Hear quotes from the beat greats and hang out a while. We're no red onion, we've got it all going on! Point your lead sled at Bay City - Mashpee and sail on by! Can't miss it!

Need breakfast on the go? Grab a doughnut at Donut Head in Dennis. Located by the water trolley for commuting convenience!
Atomic Bu's..... the best sandwiches in Sandwich! And treats too!
Cafe Deco …..cuz the moles made it!
Drop Kicks... ultra modern dancing and music in Sandwich!
R Pub in the Harwich region of Bay City. With a friendly staff, plenty of seating, and a large open space for dancing. Brought to you by Sylvia Tamalyn; R Pub, where our pub, is your pub.
Sunday's are for Pickin' That is live music with Yaro Pinion at the Pickin' Parlor in Moloch
Europhiles and South American friends meet up regularly at the sultry beachside blues club: The Anchor in Handa.
discoverA takes pride in our ability to showcase some of the best and brightest artists for all to see.
Please enjoy touring our and visiting our gallery in the discoverA Tower downtown Bay City.
http://maps.secondlife.com/secondlife/Bay%20City%20-%20Falconmoon/74/249/25
The Living Room
http://maps.secondlife.com/secondlife/Bay%20City%20-%20Brewster/211/89/26
For those that don’t have a place to go… remember: Where can you stay for one linden a day??? It’s Fun to Stay at the Y!!! a' course!
But um...it's even BETTER to stay at the “stinky” Pink Motel!!!!!! 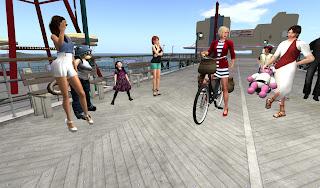