Welcome to the eightyseventh edition of the Bay City Post!
Keeping you updated on the best city on the grid!

The world has stopped spinning yet it continues to rotate.
In that spirit your reporters went out to make you this edition.

This month there were two special, sad editions.

Note: Bay City representatives are working with the community and city workers to do something special to celebrate Uccie her life.

In this edition we have for you:

Police an Fire Blotter
The one and only police officer in Bay City is keeping the pulse of our Fine City 24/7. Nothing escapes his attention, be it good, be it bad, be it catastrophical.

The Bay City Police Has Moved
They will now serve our Fine City from Moloch. Send your criminals. Keep your pyromaniacs.

Last Names Are Back
After a little wait (...) the City Workers have reintroduced Last Names.
It's different as the old last names, where all new residents could choose a last name from an ever changing list and invent a first name.
Then it became Username+Resident and Display-Name but people wanted to have Real last names again.
Now you still start off as Username-Resident but once you upgrade to Premium and you pay the fee of 40us$ you can choose a new last name from an ever changing list and invent a new first name.
You still can set a Display-Name free of charge.
Why do you want a Last Name? Because it looks way much better as Username-Resident.
And.... it is great for couples that want to go on sharing the same (yet new) Last Name.
You can change your last name as many times as you want, 40us$ each time, and go back to a previous name, for 40us$, as it is reserved only for you.
Read more about it.
Choose and set your lastname.

Strawberry Linden No Longer A Noob!
Resident Strawberry Singh tried a different method to get another last name a year ago. She became a City Worker.
Now she has two last names! Linden and Singh. (though technically one of the two is an alt)
On April the 15th she celebrated one year of being a Linden and can no longer be called a noob.
Happy Rezday Berry!!

Come Celebrate Bay City's12th Anniversary!
Celebrations is something we in our Fine City are good at. Come and join us!


New Heliport Build At Moloch.
After moving the Bay City Police Station to Moloch our police officer realized that the best way to fight crime in our Fine City a helicopter is a good way to move around. For that he ordered a brand new Heliport to be build near the station. Also it is a nice way to get some additional income as it is equipped as a GTFO station. 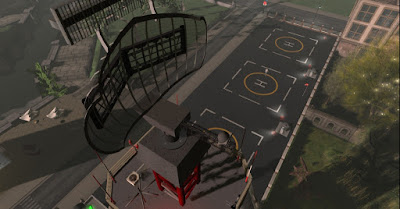 EEP Goes Live!
What if you could put the weather in a box? Sell it? Script it?
Now you can!
Read all about it.

Geek To The EEP
Talking about EEP, our reporter and expert Geek has found a way to script EEP.

Where Could Dakota Be?
You are wondering where Dakota was hiding the last time? Find out and discover!

We have the previous edition available in our archive.

Editor Vick Forcella
200504
(advertising)
The Bay City Post lasts twice as long as comparable newspapers half the size!
Posted by Vick at 04 May