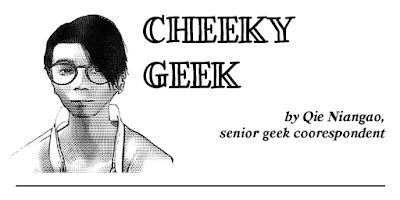 Devoted avatar aficionados may know all about "Auto Alpha" (aka "auto-hide") features of many mesh bodies, but this feature is relatively new, not universal, and was added without fanfare to some models, so it's possible you could be using the feature now without realizing it, as I discovered myself.

The underlying problem addressed by Auto Alpha is the need to hide parts of the a body mesh so it won't protrude in front of surfaces such as mesh clothing. This happens with the classic avatar too, of course, and it's easily addressed with "alpha masks" that can be worn with the clothing, but mesh bodies must instead make transparent discrete swatches of surface area -- a very common use of their scripted HUDs.

To reduce this annoyance, the "caveman" approach -- the equivalent of bashing it with a rock -- is to make a separate copy of the mesh body (and usually the HUD, too) for each and every outfit, so the body's alpha settings can be tailored to the outfit. This requires incredible discipline, lest one ever "Save As" a new outfit based on changes to one's current outfit that include any adjustment to the body alpha.

Auto Alpha in its simplest form puts a separate attachment into the outfit, where that attachment retains all the alpha information for the outfit. Then a change of outfit changes the attachment, which fixes the alpha settings accordingly. That still encodes a full outfit's alpha settings in one attachment, but at least it's not the whole mesh avatar. So still "caveman" but with a smaller, sharper rock.

Better, though, for clothing to instruct the body mesh what to hide -- and that's possible when mesh clothing is distributed with modify permissions, so one can add the Auto Alpha script directly to the clothing. The most glorious part is that this means you can add and remove individual items of apparel again, hiding and revealing just the correct bits of skin because the mesh body just does what's right. (Well, *mostly*, because "what's right" isn't always simple, as when multiple clothing items overlap the same parts of the body.)

Some clothing comes with one or more version of these scripts, but they're instantly obsolete for customers with new mesh body brands, so it's infinitely better to have Modify permissions on the clothing, future-proofing it in case you ever replace your mesh avatar. If you find yourself with no-mod clothing, by all means contact the creator, explaining how that misfeature makes their product so worthless to the current mesh avatar market.

Ideally, the mesh avatar itself would recognize the clothing being worn and adjust itself accordingly, based on what it automatically "learns" about what parts the user hides when wearing that clothing. That's do-able but I'm not aware of any products with that functionality.