The newest place to get something to eat in Bay City is not a restaurant but a gas station! Pouloco Gasoline just opened and while I did not need gas for my Tesla (a Super Charger would have been nice though) I did try out some of their great snacks. Sodas, Slushes, Coffee, Ice Cream, and even something that looks like beer are on the menu. With chicken on the sign I was hoping for some Pollo but I could not find any -- maybe on the next visit. This is a great place for a snack if you are on the run, but be prepared to pay top dollar for the gas!

Drive Safe and have a Happy Halloween!

Usually I write about food and eating but for a change I thought I would write about giving some of that up.

Right now is a time of Lent and for those Christians that observe Lent they usually try to give something up. Cultures all over the world practice fasting in one form or the other, so that is what I want to talk about today.

Giving up something for 40 days can be hard but it can also be a learning experience. We learn how our wants and desires affect our moods and energy patterns. It is an exercise in self-discipline and self-control. Some find they start to get mad when they give up something they like; others might find it hard to focus on work.

Giving up something can be challenging but it is only 40 days after all and I believe this can be a time of personal growth. It is good to know how you will feel and react when you give up something you really like because you never know if you might have to give up something for real because of job lost or moving to a different place.

You may find that after a few days of giving up chocolate you don't want to talk about chocolate or see chocolate, others may find relieve in talking out their feeling for chocolate with others you never know till you try. The great part is after 40 days Easter comes and you can eat all the chocolate bunnies you like.

This has been some food for your thoughts I hope you enjoy this season of lent.


Hello everyone I can't believe it is that time of year again, time really flies when you have a first and second life! This time of year bring thoughts of snow, Santa… and what else, sushi!!! I have been searching for a Sushi Restaurant in Bay City but so far I have not had any luck. So it looks like I am going to have to make my own. How does a Santa Sushi Roll sound? It is good here is a pic. 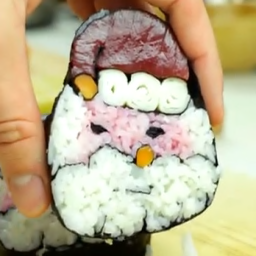 This is what you are going to need:

About a cup and half of cooked Sushi Rice.
Imitation Crab Meat, the kind in long tubes and peel off the outer orange layer.
Lightly Steamed Carrots
Some sheets of Nori
Sushi Grade Tuna
Cranberry juice

The first step is to roll 3 peeled Imitation Crab pieces in Nori, Next take you Sushi Grade Tuna and cut a notch in it and round it out so it looks like Santa's Hat. Roll a small piece of carrot and wrap it in nori for the ball at the end of the hat. Stack all of this together in a piece of nori so the Crab looks like the fur at the bottom of Santa's hat.

Next make about 4 rice tubes with nori and sushi. Cut these in half and stack them to make the beard and Santa's smile. Use a carrot for the nose.

Pour some cranberry juice over about a half cup of sushi rice and mix it in till it is pink. Roll some nori up into little tubes. Stack the Pink Rice and the Nori Tubes on top of the beard to make Santa's Face.

Wrap the whole creation in Nori and cut with a sharp knife.

Now you should have something that looks like Santa. If you got lost here is a youtube that will show you step by step. https://www.youtube.com/watch?v=AviXZFC8IFc

I hope you all have Heavenly Holiday and may there be Peace on Earth.

As I sit looking out at the fires burning brightly in Bay City tonight I can't help feeling a hole has been left by the passing of my good friend Ever. I have heard of Comfort Food so maybe there is some kind of Ever Hole Filling Food? How about an Ever-lasting gobstopper? Nah I would need a golden ticket to figure out how to make those and I am not all too sure they would taste all the well.

How about a doughnut, Ever loved doughnuts? But they have a hole in them that only makes me miss her more... well I guess I could make doughnuts holes... Hmmmm that would only help if I could figure out someway to set them on fire! (Puts on the Winnie the Pooh face) Think... think... think...

I GOT IT what if I make Sugar Doughnut holes but at the end I burn the sugar on the outside like you do with Creme Brulee?!! I think this works Doughnut and Fire I think Ever would be pleased. :)

5 cups Peanut (or other oil) for frying
1 cup milk %2, %1 they all work
1 egg
2 cups all-purpose flour
2 Tablespoons sugar
4 teaspoons baking powder
1/4 teaspoon salt
1/4 cup unsalted butter, melted
½ Cup of Sugar for the outside of the doughnuts

In a bowl mix together the milk and the egg.

In a second bowl mix flour, sugar, baking powder and salt. Stir the milk-egg mixture into the dry ingredients, then stir in the melted butter, mixing until a soft dough forms.

Heat oil to 350ºF, use a small ice cream scoop to drop about 1 tablespoon scoops of dough into the oil, Cook the doughnut holes, flipping them in the oil, for about 2 minutes or until they're golden brown. Using a slotted spoon, transfer the doughnut holes to the paper towel-lined baking sheet.

After they cool a little roll in the sugar then burn with a kitchen torch, or cook over a camp fire.

When I think of Ice Cream Sodas I think of the 1940s and 1950s. Maybe that is because the first time I ever had one was in a 1950's Restaurant in Berkeley California. www.melsdrive-in.com Well it turns out (from my research for this article) that the Ice Cream Soda really comes from the late 1800's.

Quoted from Wiki: The ice cream soda was invented by Robert McCay Green in Philadelphia, PA, in 1874[2] during the sesquicentennial celebration. The traditional story is that, on a particularly hot day, Mr. Green ran out of cream for the flavored sodas he was selling and used vanilla ice cream from a neighbor and invented a new drink.

His own account, published in Soda Fountain magazine in 1910, states that while operating a soda fountain at the Franklin Institute's semicentennial celebration in Philadelphia in 1874, he wanted to create a new treat to attract customers away from another vendor who had a fancier, bigger soda fountain. After some experimenting, he decided to combine ice cream and soda water. During the celebration, he sold vanilla ice cream with soda water and a choice of 16 different flavored syrups. The new treat was a sensation, and soon other soda fountains began selling ice cream sodas. Green's will instructed that "Originator of the Ice Cream Soda" was to be engraved on his tombstone.
Well how do you make them?

There are many ways but the main ingrediants are Ice Cream and seltzer... you know Soda Water... Perrier.  S. Pellegrino... come on you know what I mean bubbly water! Now you can use  vanilla ice cream and add syrup or you can use any falvor of Ice Cream you like. I like to use Strawberry or Chocolate.

All you do is put about 3 scoops of your Favorite Ice Cream in a glass and fill it to the top with soda water. Using a spoon you mix the soda water and the Ice Cream and drink it out of a straw.

Use Vanilla and add syrup or your Favorite Ice Cream I am sure you will love this treat and remember everything is better with a cherry on top!

Enjoy and I will see you inworld, love Keli :)

Holy Guacamole, can you believe it is May already and the year is almost half over? Good thing we have holidays to slow us down and help us enjoy the good times. Just this month we have Cinco De Mayo and Memorial Day. What better way to get the party started then with some chips and dip!
Today we will be making Guacamole here is what you will need.

Directions 1.Spoon avocado flesh into a medium bowl. Sprinkle with 1 tablespoon of the lime juice. Using a pastry blender or a large fork, mash avocados just until chunky. 2.Stir in remaining lime juice and ingredients until combined. Cover surface of guacamole with plastic wrap and refrigerate up to 4 hours before serving.

I hope you enjoy this treat and have a wonderful Second Life!