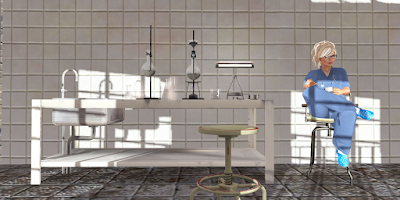 This April, less then a week ago, Uccie replaced the real world for the Big Grid in the sky.

I can not imagine the pain and hurt that her partner, her family and her closest friends are feeling. My thoughts, our thoughts, are with them.

Events went very fast. As a pixie, she suddenly appeared, sending out messages, just before she went to hospital, where she passed away. All within a week. The day before she passed away she wrote a message for us all. "There's so much I haven't done. Go out and do it for me."

Uccie used several alts, or characters, as she corrected me. Most of us know her as Uccello Poultry, she also used the characters Xandah and Zyx Flux. Probably more, I don't know.
We know her as cheerful, enthusiastic, open, energetic. Immediately you would feel at ease with her. You know you could trust her.

Without much hesitation she would speak about her real life and the difficult moments she has encountered. A wise spirit in a young body.

How she would show up was unpredictable. Mostly human, but also a cat, a dog, a mouse, a crazy chicken, a mime, a dragon, a hand or a mermaid. Lately, she was blue.

She was here to do things, from the day she rezzed, she was always busy with something. Uccie is on a mission doing things for the Teen Second Life® grid, the Isle of Lesbos, and the Second Life Birthday. For Bay City she took care of the Marina, cleaned cars during the Hot Bay City Nights, and represented Bay City as Miss Bay City 2014.

As a reporter for the Bay City Post she did interviews and teased us with hiding at unexpected places.

Her love for moles also helped very much during the annual Mole Day in Bay City.

Many times she protested the "no mimes" policy at The Pen. She did this, silent, outside the club when events took place. Even when she joined the police, as a mime, she was not able to change that policy.

She loved taking images, for the feed, her blog and for Flickr. A bit shy, she posted her first "topless tuesday" picture -- but her shyness was soon overcome. Though of course, walking all day in the open remained a challenge, specially during meetings on G rated land!

There was a sudden departure more then a year ago. Uccie had vanished and gave no reply. Not long after came a statement from her on the feed on why, and then it became silent again. We had to live without Uccie knowing she was busy in Real Life. Secret and cunning ways (HAM radio?) were used to keep some of us informed. I was out of that loop, but knew it was there.

Then COVID-19 rudely took her life. In her fight for life, she disabled our Second Life. Login was impossible, as she snapped an Internet cable when she went. That's the way to go Uccie!

In a way, she was lucky. While most have died (will die) alone by this horrible and unfair virus, her brother and guardian could be with her. She was not alone.

She is loved by many. Proof is on the Second Life profile feed, Twitter and in the comments on her last article in the Bay City Post. I am sure she has read it all.

I am feeling a bit helpless towards her partner and her brother. I wish I could do something but no idea what. Except perhaps write this, from the heart.

Read her last Bay City Post article and remember what she wants us to do. "There's so much I haven't done. Go out and do it for me."

Edit. Uccie her blog was closed at the moment of publication. The blog has now opened. I have included the link.
200426
Posted by Vick at 26 April