In April, while your favourite newspaper, the Bay City Post, was coming out of hibernation important news didn't receive the attention it deserves.

On April the 15th, the very same day that the continent Bellisseria emerged from the void, one of Bay City smallest explorers, Marianne McCann, set out on an epic journey.

With her old but sturdy airplane, the PA-18, she set out to make the longest trip possible. From the Northern most tip of the Hetrocera Atoll, the region Brindle, to the Southern tip of Jeogeot, the region Almo Bay.

I will let her speak about that journey.

I expected the trip to be harder, given the current issues with region crossings.

All told I face three disconnects from bad crossings (One in the Heterocera Atoll, one in Sansara, and one in Jeogeot) and four nasty orbs (Two in the Heterocera Atoll, one in Sansara, one in Jeogeot). Also tussled with a ban line when recovering from one of the disconnects.
Total flight time was nearly 2 hours all told. Unfortunately, I lost my number of regions due to a couple of the crashes, but "a couple hundred" seems right.

To replicate this flight, I highly recommend starting from the north: Filip has a Rez zone. Also, the PA-18 allows you to adjust the trim to give you more lift, too. Use that, cuz it's super helpful.

Also, be wary of the mountains in Heterocera and Sansar, and watch for monster-sized skyboxes in Jeogeot. Finally, open Rez is hard to come by yet in the new regions. Treasure it when you find some.
After that record making flight Marianne received a valuable unique gold trophy from the hands of T.J. Hooker. Route 66 was closed for that ceremony, traffic was diverted.
This news received just a small paragraph in the Police Blotter due to the closing of the road. Thanks to the magic of The Feed (when it works) we could revisit this epic flight and report about it.

Fast backwards, or forwards depending on the viewpoint, to August the 6th. Vick Forcella made a trip from the airport at Hau Koda to the airfield in the region Lapera in his SA Enstrom 280C helicopter. A challenge because of the altitude of 344 meters.

Marianne contacted Vick, one of the tallest explorers from Bay City, and gave him the challenge to replicate her journey from Brindle towards Almo Bay.

Vick set off on August the 7th in the pooring rain. He found a place to rezz in Brindle and placed his Enstom there to start the journey. 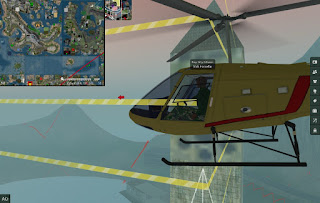 Next to gaining sufficient height to cross mountains there were many other challenges. Banlines, security orbs, skyboxes and finding places to restart the journey. Though a helicopter can lift up from tight spaces, there should not be blade crashing objects near such as trees, houses and hills.

Oddly enough there were no bad region crossings. 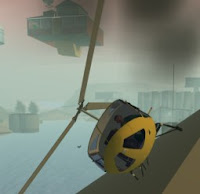 The Enstrom isn't the fastest machine in the world so Vick took two days (approx. 4 hours) to finish the challenge in Almo Bay.

Half way Vick slept in the light tower in Bellisseria. On departure he discovered his helicopter loaded with boxes given to him by ZZ bottom (foneco.zuzu). Thank you ZZ!

Vick ordered one of the best goldsmiths to handcraft a personal trophy to commemorate the flight, and placed it in the Bay City Post offices. 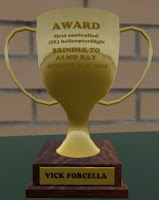